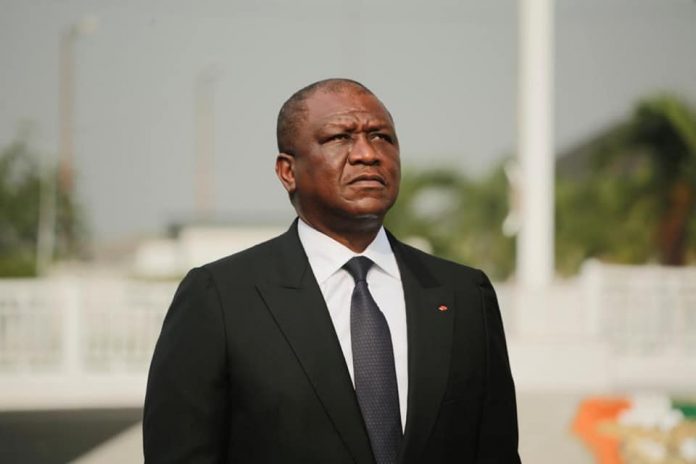 Hamed Bakayoko, the Prime Minister of Ivory Coast, has died of cancer in a hospital in Germany, authorities say.

Mr Bakayoko passed away on Wednesday, a few days after his 56th birthday. Hamed Bakayoko was flown to France in February for medical treatments and later transferred to Germany when his condition worsened.

Hamed Bakayoko was newly appointed prime minister in July, after the sudden death of his predecessor, Amadou Gon Coulibaly, sadly, the appointment did not last long. After the death of Amadou Gon Coulibaly, President Alassane Ouattara ignored the constitution and contested for the third time for President. That move from President Ouattara has caused enormous political acrimonies in Ivory Coast and created a danger to the fragile democracy of the country, which had experienced a bloody war that took many innocent lives.

President Alassane Ouattara has sent his condolences to the family of Mr Bakayoko whom he described as a “great statesman, an example to young people and a man of exemplary loyalty.”

Not only President Alassane Ouattara had favourable words for Hamed Bakayoko, a former media executive, turned politician, who played a major mediating role in the Ivory Coast’s civil war. Issiaka Sangare, spokesman for the opposition Ivorian Popular Front, described Bakayoko as “ a key player in the political game and a major player in reconciliation. It’s a true shame.”

Following the death of Mr Bakayoko, President Alassane Ouattara has appointed Patrick Achi as interim prime minister and Tene Birahima Ouattara, the younger brother of the President, as interim defence minister. Some political observers and opposition members have labelled Birahima Ouattara’s appointment as an attempt by President Alassane Ouattara to solidify his alleged illegitimate third term government and an act of nepotism and marginalization.

It is left to be seen whether President Alassane Ouattara‘s political chess games will bring political reconciliation and unity to Ivory Coast, or further divide and destroy the delicate democracy of the West African country. If there is anything Ivory Coast needs desperately at this moment, it is the return of much-need normalcy and stability to the once peaceful and prosperous country.