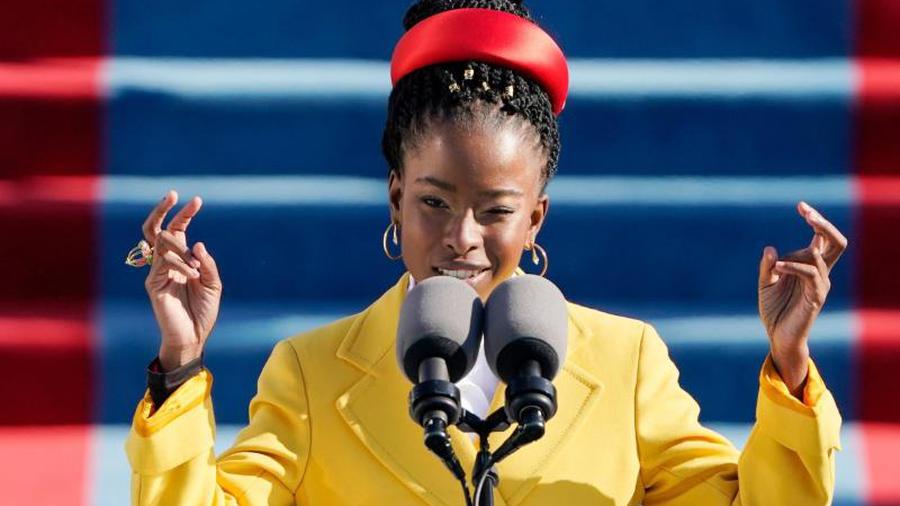 Amanda Gorman’s poem “The Hill We Climb”: The Issues of Translation, Fragmentation and Identity

It came like a flashy thunderbolt, drizzling gently over my stunned and weakly mesmerised soul. Truly hypnotised in the bliss of perfect pleasure, you may say. Alas, it was somehow difficult to attribute the source of the impromptu intoxicating ecstasy – the inauguration of President Joe Biden of the USA, despite all Mafiosi-like unconstitutional attempts to stop the legitimate constitutional process? Or those powerful poetic lines from amazing Amanda Gorman’s poem “The Hill We Climb,” which she recited at President Biden’s inauguration, and effectively caught the eyes and hearts of millions around the world? Yes, those powerful imageries captured in “The Hill We Climb,” carefully encapsulate and vividly articulate the social realities of the USA imbalanced and racist society. A country built on the tyrannical coerced sweat of the uprooted, shipped and shackled black slaves, who laboured cruelly and built the USA, turning the land of plantation and despair into an indispensable world superpower.

Today, 400 years along the line, the USA, the supposedly Mecca of democracy and the rule of law, has still heartlessly slammed the door of opportunity, equality and prosperity against the very same buffalo soldiers through institutionalised racism, segregation, backed by brutish police brutality. Racial annihilation, identity and cultural crisis define the black experience and their lives, which Amanda Gorman hugely shares as a black girl raised by a single mother. Theirs is a long, bumpy, hilly journey searching in the artificial darkness for equality, freedom, identity, black language, background, family, and community, all of which characterise Amanda Gorman’s identity as a black woman in the USA. Amanda Gorman has carefully and creatively echoed those social realities in her “The Hill We Climb.” Amanda’s skin colour and gender have played a part in the poem, which has attracted enormous attention globally. As much as Amanda Gorman’s poem has received a positive reaction worldwide, it has equally become a subject of controversy. Sure, pugnacious argument globally indeed. Would one expect calm and serenity in a wild unbalanced world?

Ironically, attempts by many literary experts to interpret “The Hill We Climb” have awakened many of the same issues Amanda Gorman tries to address in her poem. That is not all. They have raised many controversial questions, profound tendentious and contentious (mis)interpretation, fragmentation and identity issues. Some blacks have vehemently opposed any attempt by a white literary critic to interpret the poem, arguing that a white person hardly shares blacks’ experience; as such, they cannot understand black’s social cognition, mind and experience, which Amanda Gorman captures in her poem. And they have every reason to argue so.

You would expect such commotion and resistance in the USA alone, but here in my country, the Netherlands, a similar debate was/is going on. A typical case in point was the brouhaha that followed the Meulenhoff Publishers’ choice of Marieke Lucas Rijneveld, a white Dutch novelist, as a translator of Amanda Gorman’s poem “The Hill We Climb,” into Dutch. Following the public debate over the choice of Marieke Lucas Rijneveld rather than someone closer to the Gorman, in both origin and genre, Marieke Lucas Rijneveld had to withdraw, only to be replaced by a black spoken word artist Zaire Krieger, as the translator. Marieke Lucas Rijneveld (white) controversial replacement with Zaire Krieger (black) raises many questions, including, but not limited to the following: What is identity? How multiple can identity be? Can someone from a different social group understand the experience of those from another group? Is one’s expertise in a given field of study limited to works related to their social group? In other words, can, for example, a literary critic from a particular social background interpret an academic assignment written by someone from another social group?

We cannot say that one has a pregiven, constant, fixed or static identity because the meanings of identity depend on their constructions in specific contexts. Instead, we have multiple identities, which are meaningful only as a member of a group. In other words, each individual makes meaning as a member of a community or group; we do not create meanings individually because one’s identity is derived from a larger community, which one belongs to. That multiplicity of identity gives rise to fragmentation. What does one’s identity as a woman mean? Generally, one could classify women as a minority, but that classification depends on many factors such as the woman’s community, race, education, religion (you name them). For example, a black and white woman from the USA may have a different level of socialisation, power and authority despite belonging to the same gender group (woman). Generally, would one expect a European woman working in a bank to have the same social control, power and access to (re)production of meaning as her counterpart in a village in Somalia? Hardly not. Social influence and dominance are based on privileged access to socially valued resources such as education/knowledge, status, group membership. Even though blacks in the USA (and, for that matter, Amanda Gorman) have less power and control than their white counterparts in the USA, the former may still generally enjoy a higher hierarchy and social position than her “sister” in Afghanistan. Coming from a different community (black/white community) means different social experiences – and fragmentation. Although Amanda Gorman, Marieke Lucas Rijneveld and Zaire Krieger are all women, they belong to other social communities, which exposes them to different experiences, despite having the same gender. That makes one’s identity (as a woman/man) multiple: women share the same gender group, yet they are divided according to their race, class, nationality, education, levels of psychology, sexual orientation etc. All these differences define women hardly as “a unified sisterhood or nature.” The multiplicity of identity means the fragmentation of a group. As a black, one could argue that Zaire Krieger may be closer to Amanda Gorman in both origin and experience. But how about the genre? That brings one to the next question.

Can someone from a different social group understand the experience of those from another group?

Zaire Krieger defended her choice to interpret Gorman’s poem with the following argument:

“For example, if Gorman had written a dystopian novel, it would have been very different. But Gorman’s poem is about a black woman finally being allowed to take up space in the white system.”

Bob Marley famously says, “Who feels it knows it.” Zaire Krieger insists that since she shares the same racial group as Amanda Gorman, she is better positioned than Marieke Lucas Rijneveld to understand Amanda Gorman’s social situation, and to that extent, interpret her poem, which is a reflection of the poet’s social condition. In other words, Zaire Krieger believes that although the three women share the same gender group Rijneveld’s racial group as white does not only give her latent advantages and privileges over her black counterparts; as a white, it equally makes it difficult for Rijneveld to grasp Gorman’s world. Those latent and unwritten advantages and benefits make it near-impossible for Rijneveld to fully understand (and perhaps, appreciate) the black experience. While some critics might accuse Zaire Krieger of exhibiting the “psychology of race” with her argument, it is difficult to dismiss such an intense argument with a wave of a hand.

One can hardly deny that having first-hand knowledge experience of a situation might not be the same as that of someone who imagines or understands the same experience. In as much as one shares Krieger’s argument, it equally raises numerous questions. Does one have to belong to the same group (for example, race) of a victim to understand the social challenges and experience of the victim fully? Can’t a white person understand or feel the segregation of the minorities? What qualifies one as a social critic? Would one’s race, as, for example, a white anti-apartheid campaigner, be a barrier against sharing the same social mind as black minorities? Whatever one’s take maybe, the one thing is sure: we are fragmented on different levels and groups. That fragmentation of individuals leads us to another question.

Is one’s expertise in a given field of study limited to works related to their social group? In other words, can, for example, a literary critic from a particular social background interpret an academic assignment written by someone from another social group? As much as one might share Zaire Krieger’s argument that Marieke Lucas Rijneveld is not close to Amanda Gorman in both origin and genre, some might insist that Rijneveld, by way of professionalism, is qualified to translate Amanda Gorman’s poem “The Hill We Climb.”

“Rijneveld is an author and poet, but not a translator. And that is fundamentally different, argues Vaessens. “A translator has to translate the meaning of the original text,” he explains. “You can be such a good writer, but you have to get into the text when translating to realise all the meanings there are. That is a special profession”.

If Krieger was chosen based solely on her profession as a translator, that decision is understandable, as it justifies Vaessens’ argument above. But was that so? The idea for choosing Krieger over Rijneveld was because the former is “closer to the Gorman, in both origin and genre.” How does that choice support Krieger’s criticism of Meulenhoff’s selection, which Krieger compares to a film she saw in which an American actor played a Dutchman?

“Then you hear Dutch, and you think, why is he doing that? And that’s exactly what I felt. That does not mean that a good actor did not play the role, but you could also have chosen a Dutchman. That’s a feeling that a lot of white Dutch people don’t understand, but maybe a little more when I tell it like that.”

As strong as the above argument might be, it raises another thought-provoking question: Can a literary critic from a particular social background interpret an academic work written by someone from another social group?

We have many academic authorities in different fields of study from different social, racial, and geographical backgrounds. Many white academics are experts in black literary works and vice versa. Likewise, you have Africans, Asians, and Europeans who specialise in different genres, including black American literature. Must these specialists share the same racial, gender, geographical ties with their field of study to be accepted as experts in their various fields? I strongly doubt that idea.

Even though we are the same, human beings are not the allied force of nature; we are at the mercy of inevitable fragmentation. In the process of healing the wound of segregation, discrimination, injustice and inequality, we often, ironically, bruise those same social diseases.

While trying to interpret Amanda Gorman’s poem “The Hill We Climb,” and build a fair and egalitarian society, we may have, instead, exposed human psychology and the dichotomy in our race, gender, class, social hierarchy, which ironically, are the same very thorny issues “The Hill We Climb” tries to expose and address. You now understand better the hill Amanda Gorman climbs.