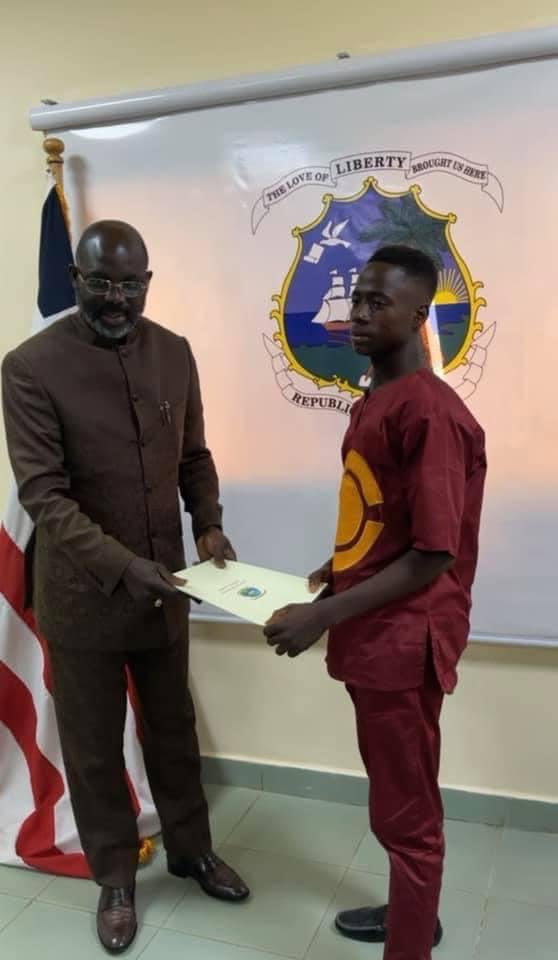 Rewarding Honesty and Integrity: The best way to go in Africa

Last week, Liberia’s President George Weah honoured an 18-year-old motorcycle taxi rider Emmanuel Tuloe, who found and returned $50,000 (£36,000) to the owner, a businesswoman. President Weah took an exceptional, exemplary and encouraging step by offering the honest lad reward incentives of $10,000, two new motorcycles and a fully-funded scholarship up to the university level. The President equally promised to recognise and award Emmanuel Tuloe with one of Liberia’s highest honours – the order of distinction – for his honesty and integrity. Furthermore, to show her appreciation, the rightful owner of the missing money, Ms Musu Yancy, offered Emmanuel Tuloe cash and goods valued at about $1,500.

The act of honesty and integrity and the rewards that came with it lead one to profound, sober reflections and open a can of questions about humans, particularly Africa and its leaders. Tuloe’s extraordinary honesty equally debunks many misconceptions about Africans.

Let us get specific facts clearly about the story. The young Emmanuel Tuloe, who found the missing $50,000, is just like any other poor young African boy, facing turbulence of social challenges, struggling to meet both ends. He relies on miserable incomes from his motorcycle riding business, and he had to quit school because he could not afford the school fees. These social trials and injustices would have justified the young Emmanuel Tuloe not returning the missing morning he found. To many, that money was a one-in-life opportunity, which would have changed his life. But the decent chap chose morality and integrity over deceit and nefarious quick financial gains, creating an aura of inculpability and virtue which only a few individuals can achieve. Emmanuel Tuloe did not complete his virtuous act through education. Hardly not. He had virtually none. He dropped out of school for lack of money. But not due to lack of morality. Morality he has. His noble achievement comes from having moral authority and principles to know good and evil and put them into practice. That brings one to our leaders.

If the poor Emmanuel Tuloe could resist the naked temptation of pocking the $50,000 he found, why can’t African leaders avoid making themselves slaves to corruption and stealing from the treasury? To become a good and visionary leader, one must first be honest with oneself, without which they can hardly make a meaningful impact in the lives of those they lead. Has it ever occurred to us that our deeds determine us, as much as we determine our deeds?

Sadly, we live in a society where political appointments are a quick ticket to the juicy heaven of enrichment and financial sustainability. That should not be the case. Leadership should be a theatre of honesty and integrity, positively empowering citizenry and building confidence in the subjects’ minds. If we could radically change the mindset of both our leaders and their people to this effect and celebrate and fully compensate integrity and good result, we will be on the envious way to progress and self-sustainability because human socio-political and economic salvation rests on integrity and the power of personal character of accountability. The culture of integrity and responsibility bears the fruit of effectiveness and generates a respectful standard that enables further continuous development.

When Sudanese-born billionaire Mo Ibrahim established his good-governance foundation in 2006, which focuses on the critical importance of governance and leadership for Africa, he firmly believed that good leadership is tantamount to tangible improvement in the citizenry’s lives. The foundation awards to African former Executive Head of State a mouth-watering payment of $5 million – the world’s largest, exceeding the $1.3m for Nobel Peace Prize – for good governance. To win the prize, the winner must have developed their country, lifted the country from poverty and effectively paved the way for sustainable and equitable prosperity. Furthermore, the leader must show incredible role models for the government and Africa as a whole. Based on the achievements of the leaders, it is expected that Africa continues to benefit from the legacies in terms of experience and expertise left behind by the leader and enable the winner to continue in other public roles in Africa.

In a nutshell, the idea behind the Mo Ibrahim Foundation is to inculcate the spirit of good governance, integrity, honesty, persistence, amongst others, which are the much-needed ingredients for a successful and sustainable society and a successful life.

Mo Ibrahim award is the benchmark for excellence and good leadership because, with the colossal award price, the former leader/winner would have enough income, apart from the salary and gratuity, to live comfortably after leaving office.

Despite the colossal prize of the Mo Ibrahim award, only just a few African leaders, such as former president Joaquim Chissano of Mozambique, Festus Mogae, former leader of Botswana and Pedro Pires, ex-president of Cape Verde have won the prestigious award. An Honorary Laureate award went to Nelson Mandela to recognise his extraordinary leadership qualities and achievements in South Africa and Africa in general. Sadly, many African leaders would instead choose to steal billions from the State coffer; by so doing, they ruin the lives of their subjects and the State in general. No, they prefer not to prove their worth and leave a lasting impression in the subjects’ minds. To achieve meaningful leadership, a leader must add to the lives of those they lead, something which cannot be bought or measured with money but instead by sincerity and integrity.

Africa lags in development and good governance because Africans have chosen sycophancy and irresponsibility over integrity and honesty. To move further in the right direction and enter the prestigious stage of development and sustainability, Africans must demand nothing less than the best from their leaders. They must celebrate leaders who have positively impacted their lives and reprimand those who did otherwise.

Liberia’s President George Weah has taken significant and encouraging precedence by rewarding the young honest Emmanuel Tuloe for his integrity and exceptional honesty. Others must emulate Mr Weah and the young Tuloe’s integrity and extraordinary honesty to inculcate the spirit of good leadership and sustainable development on the continent. We must celebrate the young Emmanuel Tuloe’s “exceptional sense of morality and good citizenship,” as President George Weah puts it, both in Liberia and beyond. On the other hand, Africa must set a leadership bar and accept nothing less than Emmanuel Tuloe’s target and reward leaders and citizens who have excelled in their duty handsomely. By so doing, Africans will firmly put honesty and integrity over personal gains and aggrandisement. That means doing the right thing in an honest incorruptible way.

In the end, it should not be about how much wealth one has acquired, but the integrity and ability to do the right things – even when no one is watching – that affect those around us positively. There is no better way to create the spirit of stainable development – socially, mentally, politically, economically – than to encourage and reward honesty and integrity.