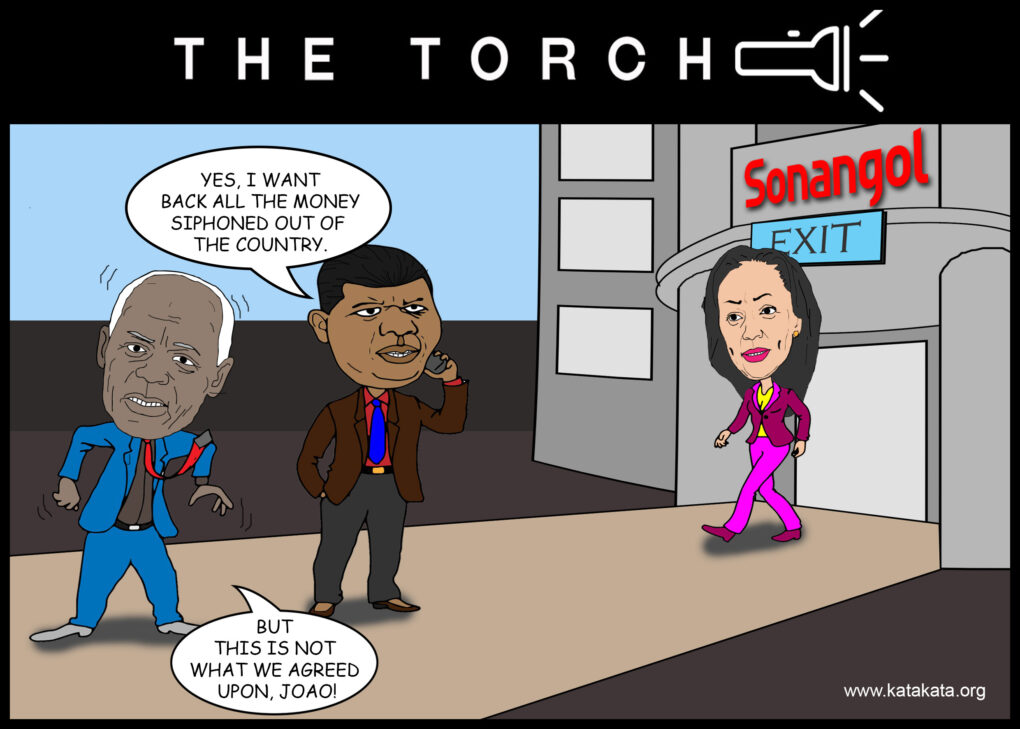 The latest news that the USA will deny entry to Isabel dos Santos, one-time Africa’s richest woman, for corruption is a welcome development, which will ring an alarming bell for other corrupt individuals in Africa and the rest of the world. But that same measure taken by the US equally exposes the other side of the coin – the double standard of the US and the rest of the West.

Ms Dos Santos, 48, the daughter of Angola’s former President, José Eduardo dos Santos, was accused by the US of “involvement in significant corruption” and “misappropriating public funds for her personal benefit.” The accusation from the USA came after the Angolan government placed her under investigation and confiscated her assets for alleged corruption. As severe as the corruption accusation and entry ban might sound, it will be interesting to ascertain when the US knew about Ms Dos Santos illicit businesses in the USA and why it took the West so long to respond to the alleged corruption. Furthermore, it would not be wrong to ask where Ms Dos Santos managed to hide much of the billions she allegedly stole. Is the corrupt money banked and invested only in Africa or the West?

During her father almost 40-years presidency, Isabel dos Santos became the richest woman in Africa with an estimated net worth of $ 3.5 billion. After being indicted and her assets frozen in Angola and Portugal, the net worth dropped to an estimated $2bn – still a significant amount in a country where an average family struggles to put a meal on the table despite the country’s enormous mineral resources. Isabel dos Santos made her billions during her father’s reign as the chairperson of the state oil company (Sonangol ) and from other lucrative business ventures in diamonds, land, oil and telecoms. She and her husband have owned a stake in more than 450 companies, a significant number of them based in the western countries, such as the USA, UK, Switzerland, Portugal, the Netherlands, France, Spain, Austria, Cyprus, Malta, Luxemburg, Ireland, Liechtenstein, Singapore, Romania, Austria, Czech Republic, Hong Kong, Japan, British Virgin Islands, as well as United Arab Emirates (Dubai), India, Brazil, Chile and Argentina.

The US visa restrictions for Ms Dos Santos would bar her and her immediate family members from entering the US.

Isabel dos Santos has always denied the allegations against her and termed them a politically motivated witch-hunt by the Angolan government.

Blind Eye and Holier than holy

The West has been boisterously vociferous in criticising corruption in Africa but turned a deaf ear to the illicit billions of dollars being laundered and deposited in their various countries by corrupt parties it demonises. Western leaders and their media often label Africa as corrupt and chasten African leaders for aiding corruption. However, they remain silent on the role of the Western financial institutions and government agencies in facilitating money laundering and the flow of illicit money to the Western countries, including their banks. The West uses the ill-gotten funds to develop their countries. That holier than holy approach aims to exonerate the West from corruption and present Western countries as incorrigible while dehumanising their African counterparts. But the West is an aider and abettor to the same corrupt practices it criticises. According to the UN, around $148 billion is stolen from Africa yearly by political leaders, the business class and government employees, with the conspiracy and intrigue of banking enterprises in Europe and North America.

When you interact with the Western media, Africa is constantly portrayed as desperately poor and African leaders liable for the continent’s terrible circumstances. However, you won’t ever watch, read or hear anything in these news sources about the role of Western governments, financial institutions, land and property advancement agencies and influential organisations in the West in advancing defilement in Africa. There are many reasons for the intentional silence on the role of the West in aiming corruption in Africa. Apart from interwoven interest and links between the media and the affected organisations, fear of losing advert money keeps media organisations silent on the role of the governments, corporate entities and agencies. What matters most to the West is the monetary gains.

The best way for the West to demonstrate their incorrigibility and zero tolerance for corruption is by refusing to accept corrupt money deposited in their banks or invested in their countries. You cannot openly criticise a practice and at the same time benefit secretly – and wholeheartedly – from the same acts you have openly demonised. The former British Prime Minister David Cameron did not have to tag himself the moral apostle to shamelessly call Nigeria and Afghanistan “fantastically corrupt” in the presence of the Queen of England and camera. Yet the same British prime minister did not bother to condemn or return billions of pounds that corrupt politicians from Nigeria, Afghanistan, and other countries hide in his country, while Britain protects the culprits. Call it a double standard, but would the West and their media see it that way? We probably have a problem with the definition of morality or honesty. Or both. If the West or their media told the world why Africa is poor and exposed who benefit from the poverty, that would go a long way in fighting corruption and money laundering. But the West and its media would instead choose lip service, watery and boggy journalism over the truth. Presenting the West as a model of transparency, honesty and decency, would maintain the status quo and its dominance over Africa.

Britain is not alone; France, Switzerland, the USA, Luxembourg, Liechtenstein, Austria, Germany, the Netherlands, Belgium, Ireland, and so many other Western countries actively provide the means, tools and even the legal and institutional framework to aid corruption in the developing world, with the billions from the third world countries finding their ways to the West. It is hardly a secret that billions of dollars from African leaders are laundered and securely kept in various Western countries. Nigeria’s former leader General Sani Abacha stole and hid an estimated 5 billion dollars in most western countries, yet those States neither reported the stolen monies in their midst until the loots were made public by African investigators. Eventually, the UK, Switzerland, Liechtenstein, the USA etc reluctantly decided to return the illegal monies, albeit after so many years of litigations. Yes, a legal battle over what didn’t belong to the West. But the greed and lip service of the West did not end with the legal struggle; Nigeria was forced to forfeit part of the stolen money as legal costs for remitting what belonged to Nigeria. Who is more fantastically corrupt here? According to transparency international and the whistleblowing site WikiLeaks, ex Kenyan President Daniel Arap Moi and his family banked more than 1 billion dollars in 28 Western nations, including England; neither those affected western countries nor their media outlets found it necessary to disclose the illegal wealth to the world.

How about French-speaking African leaders? Apart from forcing their former colonies to deposit a significant amount of their foreign reserves with France and to borrow the same money that belongs to them with interest, France has become a financial paradise for African leaders where they have thousands of bank accounts containing billions of dollars, investments, properties in the most exclusive areas of France. It has never occurred to the French authorities to reveal those behind that day-light pen-robbery or confiscate the illegal possessions. No. Like other Western hypocrites who pay lip service, France is actively using the stolen billion in their country to buffer its economy.

Meanwhile, the West and their media would castigate Africa as corrupt and poor without fully revealing why Africa is in a miserable state and who is helping the criminals to hide their loots. Congo-Brazzaville President Denis Sassou Nguesso and his family have at least 112 bank account in France and properties and ventures worth billions. Gabon’s Omar Bongo and his family bought more than 33 luxurious properties and assets valued in billions of dollars in France. Omar Bongo’s son, Ali Bongo, the current President, purchased a 100 million dollar property occupying 4,500 square meters space and 3,700 square meters garden, situated in one of Paris’s most exclusive and expensive areas. The Democratic Republic of Congo’s former President, late Mobutu Sese Seko is not left out. According to the Panama Papers leaks, the late President had billions in his bank accounts scattered in France, Belgium, Switzerland, and many other European countries. Other corrupt African leaders such as President Teodoro Obiang Nguema Mbasogo of Equatorial Guinea, Paul Biya of Cameron, former president José Eduardo dos Santos of Angola (and the counts go) have invested billions of stolen dollars in France, Portugal, Spain and other Western countries. Instead of holding the corrupt leaders accountable, those Western allies in corruption actively provide African owners with the tools, means and legal mechanisms to hide their ill-gotten wealth while vigorously using the billions hidden in their countries to develop them and provide services to their subjects at the expense of miserable, poor Africans. The counts can go on indefinitely.

What does this say about the West’s dishonesty, indecency, selfishness, and hypocrisy? A lot. As much as the West tries to act as the moral authority and beacon of democracy, it has failed to demonstrate its commitment to fighting corruption. The failure has made the West an aider and abettor to the same corrupt practices it criticises. Through its hypocrisy, lip service, double standard practices, the West has actively supported and encouraged corrupt African leaders to loot the continent, while the Western media looks elsewhere. That irresponsible attitude of the West has destroyed the lives and future of many poor Africans. Whenever the West criticises Africa as undeveloped or points an accusing finger at African leaders for corruption, Western leaders and their media outlets should carefully look at their other four fingers pointing at them as well.