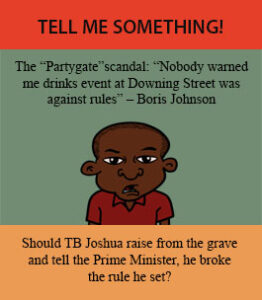 The “Partygate” Scandal: Taking responsibility and accountability and doing the right thing

Lying amongst politicians has gained currency and normalcy, becoming part of everyday reality. So is the shifting of responsibilities amongst leaders. You may ask the likes of Nigeria’s information minister Lai Mohammed if you have doubts. However, many of our leaders have graduated with first-class honours in the art of deceit and lies, that they can professionally sell refrigerators to Alaskans and convince them they are heaters. Either these politicians are too intelligent and artful that they easily brainwash or hypnotise their subjects into believing and ignoring their shortcomings and re-electing them into office despite the obvious. Or the electorate is so simple-minded to believe the Sugar candy Mountain stories of their deceitful leaders. Whatever the case may be, it is something else for a leader to paint those lies so horrible that one can quickly discover the truth and hold them accountable for their lies. That makes the British prime Minister Boris Johnson stand out amongst the crowd and unceremoniously dignified amongst other politicians.

Maybe Boris Johnson is a different species of politician. Or he is fundamental stupid or full of himself that he strongly underrates or challenges his subjects’ intellectual discernment or perspicacity. Never mind that the same Boris Johnson succeeded in craftily selling the costly bogus Brexit, nicely wrapped in lies and falsifications, to his people, a deal that catapulted him to his political apex. Imagine what having a condescending attitude towards others could lead one – and for that matter, a nation – to. A deplorable state, perhaps. Well, let that be a discussion for another day. How could one explain the latest in the series of scandals (tell me something else) engulfing the Downing Street 10 and the besmirched British Prime Minister? It would be hardly insulting but somewhat honourable to give Mr Johnson his due respect by adding “scandalous” to his tarnished title. Call me “Scandalous Prime Minister.” Very much better – and well deserved. Befitted indeed. Smiling, Boris?

As the leader of the British government, the Prime Minister is responsible for the implementation and execution of the country’s laws – especially when the country is in a state of turbulence, thanks to the COVID-19 pandemic. With death tolls rising, hospitals overwhelmed with coronavirus patients, forcing medical personnel to work dedicatedly around the clock, harsh measures had become inescapably, an unwelcome reality. Like other governments globally, the British government under Prime Minister Boris Johnson initiated a series of painful measures to curtail the spread of the virus and reduce the deaths, including forced quarantine, the closing of businesses, separating family members and stopping friends and families from meeting and interacting physically with loved or sick ones. It was a painful but necessary government policy the Prime Minister came live on the national television to impose on his fellow Britons. Soon the Corona rules became stringent and followed rigorously with imposed heavy fines that run in thousands of pounds, including resignations over those breaches of coronavirus regulations.


Boris Johnson’s senior Minister, the former Health Secretary Matt Hancock, resigned over Covid breaches. On 5 April 2020, Scotland’s chief medical officer Dr Catherine Calderwood resigned following her two trips to her second home during the first coronavirus lockdown. How about Professor Neil Ferguson, whose research helped shape the UK’s coronavirus lockdown strategy? On 5 May 2020, following his humble admission that he broke social distancing rules by meeting his lover at his home, he resigned as a Government advisor. After organising a Christmas party in 2020 during COVID-19 lockdown, Allegra Stratton left as the Prime Minister’s spokeswoman for the COP26 summit after a leaked video showed Downing Street staff joking about the party when other countrymen and women had to go into a strict lockdown. Former Tory London mayoral candidate Shaun Bailey was also a victim of the ongoing “Partygate” scandal. He had to step down this week from his second London Assembly role. For travelling between Glasgow and London in September 2020 despite knowing she had coronavirus symptoms, MP Margaret Ferrier will stand trial in August this year. Those are some of the high-profile cases. Thousands of other British citizens made unquantifiable sacrifices and paid ultimate prices for breaking Corona rules.

It would be too harsh to describe all the above Covid breachers as the worst individuals in the UK; their acts might be careless and irresponsible, but they, at least, admitted they made mistakes and willingly did the right thing and paid the price, including ultimate resignation.

Not so with British Prime Minister Boris Johnson, who is supposed to lead by example.

On different occasions, Boris Johnson drastically disobeyed the same corona rules he set up to protect. The same rules he wants every Briton to obey. The same corona regulations that his colleges, his senior government officials broke and resigned. Each time the Prime- Minister broke the rules, he would first deny any corona breaches; when the lies become too big and excessive to hide, he would admit and hypocritically apologise. Of course, he would expect the British people to accept his apologies. Life goes on. Humans sacrificed – known and unknown, friends and enemies.
Would “I am sorry” from an average person on the street who breaks the corona law be enough an excuse to set them free? Not.

Many had to pay heavy penalties. The Prime Minister knows that. Nor did he care much. Boris Johnson cares only about his political survival at all costs. That would include looking for a carrier, a culprit, for his rampant irresponsible behaviour, political mistakes and adventurism.

Now that Boris Johnson is caught red-handed with pants down on his recent garden party lies, did it come to any as a surprise when the Prime Minister shamelessly defended his inglorious garden party during strict corona lockdown by audaciously insisting that nobody warned him that drinks event at Downing Street was against rules he set?

Only those who do not know Prime Minister Boris Johnson would be surprised about his watery, irresponsible defence. Sure, the same leader of the country who disobeyed the same rules he made. Yes, the same corona breaches cost the heads of many senior government officials and so many hard-working Britons, who have paid the ultimate price.

The question is: When will scandalous Prime Minister Boris Johnson take responsibility and accountability and do the right thing?