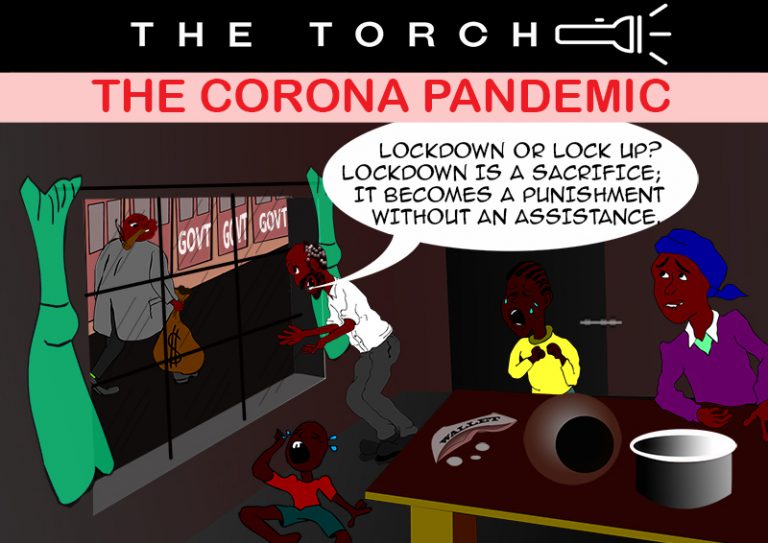 It is more than one year since the novel corona conquered the entire wishy-washy world dauntlessly with its lethal, vicious virus. The deadly disease first erupted in the Chinese city of Wuhan in December 2019 before spreading rapidly to other parts of the globe. According to the data published by Johns Hopkins University, more than 111 million people have contracted the virus, 86.4 million infected people were lucky to have survived the virus, and 2.4 million others have succumbed to it. And the death tolls are still rising.

To curb the pugnacious pandemics, the World Health Organization (WHO) recommended some necessary measures, such as sanitizing, hand washing, wearing face masks, and lockdown, among many others. But defeating the deadly virus means adherence to the medical guidance and recommendations of the health experts. That requires sacrifices, commitments and solidarity. Yes, hecatombs and solidarity amongst all the citizens. Not some individuals. But that is hardly the case. All animals are equal, but some are more equal to others. You better believe this.

Solidarity, selflessness, fairness are the sine qua non of controlling the rapid spread of coronavirus and reducing the COVID-19 related deaths.

According to the definition, solidarity is an awareness of shared interests, objectives, standards, and sympathies, creating a psychological sense of unity of groups or classes. We can rightly argue that solidarity, more or less, binds people together as one entity. If solidarity is the cement that holds a group together, one expects such togetherness, homogeneity and selflessness in our attempt to tackle the COVID-19 menace. But that means something else in reality. Those forfeitures are for the less fortunate. Not for the advantaged.

The exacerbated social inequalities in our countries have exposed the imbalance in our social relationships. That lack of social equilibrium has manifested and created a situation whereby ordinary citizens are on the receiving end of the fight against coronavirus. Yes, the Corona war of necessity, which calls for sacrifices to eradicate the monstrous virus. The war situation demands unprecedented actions and measures. In line with the battle, sacrifice, commitment and solidarity, our leaders forced inglorious lockdown, curfew, social distancing, facemask on the citizens. On the other hand, the more advantaged members of the solidarity club, appear to be aloof to the prescriptions needed to eradicate the virus.

The result? We entered into lockdown as unequal partners in the fight against coronavirus. While one group hardly feels the burdens associated with the lockdown, another party – the less privileged group – bears the hard results. Image the employees who keep their salary intact and the businessmen and women who solely depend on their enterprise to survive; one begins to understand the mockery of the so-called solidarity. The imbalance situation exposes that naked hypocrisy and double standard as we fight coronavirus. We have politicians and government workers who enjoy their monthly income while forcing a lockdown on individuals whose source of existence depends on their daily profits. Would it be entirely wrong or unfair to expect our politicians and leaders to contribute a little percentage of their earnings to resuscitate or compensate other members of the society who pay the ultimate financial price in the name of lockdown? With the unpredictable nature of the African economy and the fragility of its healthcare sector, surviving under lockdown restrictions has been a challenging task to millions of Africans. The virus exposed human vulnerability, societal cracks and financial meltdown. Suffice to say that real solidarity would have minimized these social-economic devastations.

With the lockdown in place, many penurious families, who depend solely on their daily income go to bed with an empty stomach. Job losses and homelessness become the norm. Several people survive from hand to mouth; when the lockdown was imposed by the governments, these people were left without any source of livelihood. Hunger and a sense of hopelessness reign. There is little doubt to argue that this state calls for true solidarity.

But that is hardly the case. While many countries in the West administer hundreds of thousands of covid-19 vaccines daily, many African countries are still lagging, struggling with testing due to shortages of testing kits. Vaccination is still a mirage in Africa. Worse enough, the covid-19 donations from well-wishers to some African countries could not reach their destinations. Reports had it that consignments for the novel virus donated by Chinese billionaire Jack Ma did not reach many targeted African beneficiaries intact. Some of the consignments were re-directed to different locations, where they were offloaded and repackaged and sold out. The international financial institutions and foreign governments also approved billions of dollars for African governments to enable them to fight COVID-19, but the bonanza is hardly judiciously accounted for. This shrewd act could not have been executed without the active knowledge and collaboration of some heartless African leaders.

In South Africa, vulnerable people who were dwelling in informal settlements without community toilets and electricity were forced to look for relief in churches and temporary shelters by the lockdown. On the other hand, South African middle and upper classes were confined by the same lockdown to luxurious apartments in the leafy environment with access to WiFi, swimming pools, etc. While the rich were complaining of “cabin fever” and protesting at not being allowed to jog or walk with their dogs on social media, the poor were battling long queues to receive social grants from the government – if at all those miserable handouts were available.

In the face of these challenges, security officers across the continent deployed to enforce lockdown did not help matters. Yes, enforce the lockdown mainly on the poor and disadvantaged. It was a common sight to see security agents in South Africa beat up the poor blacks who had gone outside to look for foods while sparing the whites who were running their business during the lockdown. Call it inequality, hypocrisy or double standards; they all define the inexcusable proceed.

However, the hypocrisy, double standard and discordance are not limited to Africa. In the Western world, politicians have recommended tough measures to curtail the aggressive virus, including total lockdown and curfew. But in most cases, it is a section of the public, mostly the business entrepreneurs that bear the brunt of the lockdown. While leaders and employees are earning their salaries in full, many business owners have gone into bankruptcy. In such a situation, hypocrisy and double standards reign in the face of solidarity gospel. Real and honest solidarity would mean sacrifice on the part of everyone. Everyone. Not some individuals.

In a situation where leaders do not lead by example, how does one expect a meaningful response, positive results and attitudinal change from the subjects? Your guess is as good as mine. From former President Donald Trump of the USA, who refused to wear a mask, to President Emmanuel Macron of France, caught violating their own covid-19 rules, our leaders have given us the impression that we are unequal partners in the fight against coronavirus. In my country, the Netherland, the honourable justice minister, the chief-enforcer of covid-19 rules, Ferd Grapperhaus was caught breaking social distancing rules at his wedding, where he invited many guests. Grapperhaus had been fined €390 to ‘enhance the credibility.’ On several occasions, President Trump was caught on camera discouraging people from wearing masks. Israeli Prime Minister Benjamin Netanyahu and President Reuven Rivlin also held a festive holiday meal for their children, drawing criticism from the public. Moreover, Mexican President Andres Manuel Lopez had been caught shaking hands, violating the social distance rule.

How about laxity on the part of our leaders? Like with many other leaders, Donald Trump’s administration’s lax attitude, incorrect policy and delayed action cost the majority of Americans their lives. Trump ignored the WHO’s warnings and refused to lay down safety measures led to many deaths and other health challenges in the USA. Reports showed that if Trump’s administration had implemented the WHO’s measures earlier, it could have prevented many Americans from contracting the virus and saved lives.

The coronavirus pandemics has contributed to the increase in racism and xenophobia. People from different races and nationalities have been subjected to mistreatment. With President Trump baptizing COVID-19 as the “Chinese virus” and “Wuhan virus,” some chauvinists and bigoted minds have poured their venom on innocent Chinese, whom they have been blamed wrongly for spreading the coronavirus. Besides, many Chinese visitors to some European countries and the US have been stigmatized, abused, attacked and sometimes denied entry to restaurants due to the same reason. Likewise, blacks in China have been exposed to brutal racial profiling and mistreatment; they are accused of spreading COVID-19, even though everyone knows the virus originated in China. What an irony, hypocrisy and double standard!

The corona pandemic has brought horrendous miseries and millions of deaths around the world. The ability to defeat the belligerent virus calls for a combatant response. The hazardous situation demands solidarity, unity and unanimity, in words and deeds. More than one year, along the line, the world is still struggling to defeat the dangerous virus. Have you understood why we still have a long way to go in the fight against the aggressive COVID-19?