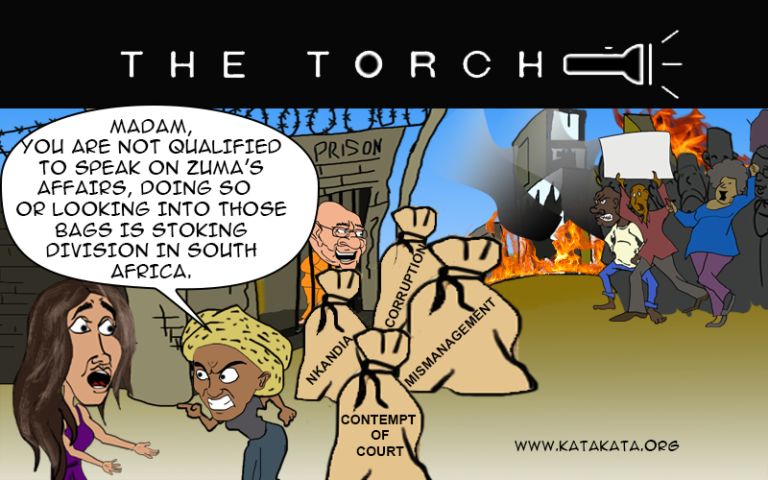 The daughter of South Africa’s former President Jacob Zuma, Jabu Zuma, has attacked British supermodel Naomi Campbell and accused her of “stoking division” in South Africa after Campbell rebuked the former president in an open letter.

Naomi Campbell reprimanded former President Zuma for contempt of court, which led to his 15-month in prison. His jailing subsequently triggered violence and unrest from Zuma’s angry supporters, which resulted in the loss of hundreds of lives and billions in properties in South Africa.


The model chided Zuma’s behaviour which she insisted was a mockery of Nelson Mandela’s idea of a prosperous South Africa. After spending 27 years in prison for his political activities, South Africa’s first black president, Nelson Mandela, led his country’s transition from white-minority rule in the 1990s. He laid the foundation for democratic government in post-apartheid South Africa based on respect for the rule of law. Many have repeatedly accused former president Jacob Zuma of undemocratic acts and corruption, all of which run contrary to Mandela’s vision of a new South Africa.

Naomi Campbell published her open letter to former president Zuma on her Instagram.

“You have talked of the rule of law and the South African constitution being something that should apply to everyone. Yet you defied the courts and were sentenced to 15 months in prison.” Naomi Campbell chastened former president Zuma in her open letter.

“If you still consider yourself a leader, then please act and take responsibility like one.
“Agree to finish your appearance in front of the State Capture Commission and, equally, you will have your days in court to contest the corruption charges alleged against you. Put the Nation first,” Campbell advised Zuma.

Responding to Campbell’s letter, Jabu Zuma scolded the model and insisted she was “not qualified” to speak on Zuma’s affairs, insisting that her father had sacrificed a lot for South Africa.

Jabu defended her father and claimed that the former president was not responsible for the unrest and riots that followed his jailing and maintained that the violence was beyond her father.
Instead, Jabu blamed President Cyril Ramaphosa for the violence, which she claimed was a manifestation of unemployment and economic hardships in South Africa.

Although South Africa is experiencing some economic malaise, it is hard to separate the riots and unrest, which followed Zuma’s jailing, from the political reality on the ground and attempts by different factions to control power in South Africa. Only a few political novices would believe that the recent violence was neither planned nor carefully orchestrated by some treacherous elements for political gains.

Jabu Zuma may castigate President Cyril Ramaphosa as the culprit of the unrest; would she equally exonerate her father from mountainous criminal and corrupt allegations facing him? Would Jabu defend her father, the former president, for repeatedly disobeying a court order to appear before it and prove his innocence? It is hard for any decent, law-abiding person to accommodate former president Zuma’s actions and behaviours or accept them as a model for the new South Africa the likes of former President Nelson Mandela suffered for and aspired to achieve. If Ex-President Zuma can act with impunity and place himself above the country as the former president, his actions may become anathema and indeed indefensible in the eyes of those who genuinely love and aspire for a new South Africa where democracy, equality and the rule of law reign supreme.