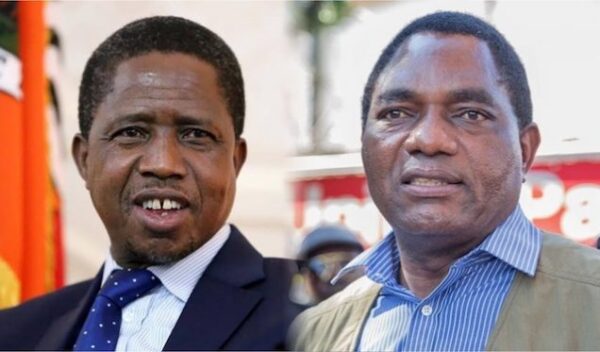 Zambia’s Election: A Lesson to Other African Countries

“I would (therefore) like to congratulate my brother, the president-elect, His Excellency Mr Hakainde Hichilema, for becoming the seventh Republican President.”

“Thank you for giving me the “opportunity to be your president”.

“I will forever cherish and appreciate that authority you’ve invested in me. Countrymen, women in and the youth, all I ever wanted to do was to serve my country to the best of my abilities.”

“Of course, there were challenges on the way. But what I appreciated most, with your support during the tough times.

“Lastly, I’d like to thank all those who voted for my party, the Patriotic Front, and myself. To you, I say your vote was not in vain. Please continue supporting us.”

You might not be the biggest fan of President Edgar Lungu, but we must not deny the truth; he has my most profound respect for putting his country’s interest before his ambitions. President Goodluck Jonathan of Nigeria was one of the few African leaders who respectfully conceded presidential elections as incumbents. Such a constitutional duty is normalcy in the West. It is hardly so in Africa and other emerging countries. This illegality explains why Africa and the rest of developing countries have been moving at a snail-speed in their quest for social development and democratic maturity.

Initially, that African blood in President Lungu triggered his attempt to challenge the presidential result, which gave Hakainde Hichilema 2,810,777 votes against Lungu’s 1,814,201, with all but one of the 156 constituencies counted. However, President Lungu changed his mind and accepted defeat.

“Based on the revelations issued at final results, I will comply with the constitutional provisions for a peaceful transition of power.” President Edgar Lungu announced.

A noble and respectful decision indeed, which deserves a big applaud amongst Zambians and the rest of Africa. The defeat of incumbent President Edgar Lungu by the opposition candidate and Lungu’s decision to conceal loss reveals three key elements vital for political and economic development to take a solid root in Africa.

The power of the electorate

The recent election in Zambia is of great significance; it has unmasked and smashed the common myth amongst Africans that an incumbent can never lose an election. We experienced the same in Malawi, where Lazarus McCarthy Chakwera defeated the incumbent, former President Peter Mutharika. The new political awakening has equally given hope to other disgruntled Africans that they (and only they) can change their lives and the destiny of their children if they can make the right political choices and demand their rights and accountabilities. Those in the position of power can hardly relinquish authority unless the electorate forces them to do so. Yes, African leaders can lose elections – and most of them do – but voters must demand nothing other than be represented by those they voted for.

The demographic reality in Africa shows that the youth is in the majority in most African countries. Being in the demographic majority means that the younger voters, logically speaking, have the political advantage and the power to choose their leaders in Africa. But the reality on the ground says otherwise. For the third time since Zambia gained independence from Britain in 1964, the power has been transferred peacefully to the opposition. That did not come without determination and resistance. First of all, there was a massive turnout of primarily young people, some who went to the polls, dressed in their academic clothes, demonstrating against unemployment. Most Zambians have complained about alleged corruption, mismanagement, and lack of jobs, which they blamed on the Patriotic Front, the ruling party.

“Young people gave us the vote. Four million young people between the ages of 18 to 24 registered to vote. It was a huge turnout and it was very personal to them. They want to ensure the mistakes of their parents were corrected. They have voted for our leader on basis he has better policies and ideas and can strengthen our state institutions.”

The transparency of the election commission

Sadly, in many African countries, the election commission, saddled with the task of conducting elections, often finds itself becoming the tool of the incumbents to actualise their malicious political agendas. Most of Africa’s election commissions are far from transparency and independence, its primary objectives. Sadly, it becomes increasingly hard to convince voters to vote en masse when we plant doubts in the electorate’s minds. African leaders’ lawlessness, gross undemocratic acts, and riggings of elections will cease once they realise the election commission is independent and is unlikely to succumb to the leaders’ wishes..

Zambians have spoken, and the election commission demonstrated its role as the fearless guardian of the country’s election; Zambia has courageously jumped one huddle, but there are still more difficult obstacles ahead. Despite being Africa’s second-biggest copper miner, Zambia faces a severe economic meltdown with jobless youths and many families struggling to put a meal on their table. The financial support from the International Monetary Fund (IMF) is on hold pending the election. Many analysts believe the debt restructuring plan from the IMF will be the first acid test to determine the seriousness and readiness of the incoming administration to tackle the economic malaise of the country. The question in the minds of many is whether the new president has all it takes to bring sound structural changes to the country.

As a former CEO at an accounting firm before entering politics, many Zambians and the world hope that Mr Hichilema, 59, will use his experience to turn the recession-hit economy around. Now that the price of copper is increasing, will the new president grab the opportunity and restore the confidence the electorate has bestowed in him and put Zambia in its deserved position in the world?